This broth could be repurposed in a number of ways. Use it to make risotto, or sip it as is and fold the picked chicken with some diced celery, mayonnaise, and some minced tarragon for a quick chicken salad.

For the broth: rinse the chicken well, taking care to remove any bits of organ meat hidden underneath the rib cage area. Split the chicken in half using kitchen shears. This makes it easier to fit the chicken snugly in the pot. Place the chicken in a large soup pot. Add the rest of the ingredients along with 1 cup of ice. Cover with cold water. Bring the liquid up to a strong simmer, then lower the heat to a gentle simmer. Skim off the scum that rises to the top with a ladle and cook for about an hour.

Once the meat starts to pull away from the bone of the drumsticks, remove the chicken with tongs and set on a sheet tray to cool slightly. Once it’s cool enough to handle, pick the chicken meat, keeping the breast and thigh meat separate. Strain the broth into a large bowl or another large pot using a fine-mesh strainer. Set aside.

To finish the soup, fold the dark meat into the soup. I prefer to save the white meat for another preparation (see quick chicken salad in the recipe intro). This is a personal preference; add whatever mixture of meat you like. Add enough broth to keep the soup loose and broth-y. Depending on how much water you started with, you may end up adding all the broth. Save whatever’s leftover; it freezes beautifully.

Season the soup with lemon juice and more kosher salt. Since the broth is mostly unseasoned, you’ll need to add at least a couple more large pinches of salt. Once it’s tasty, chill the soup. There will be some residual fat that rises to the top of the container and congeals. Scrap that off once the soup is fully chilled and save for another use – such as frying an egg, folding into fried rice, or finishing a pasta. 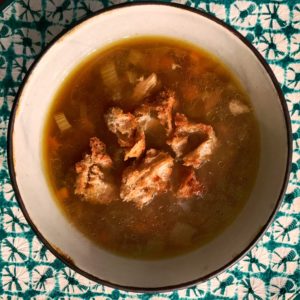