I love this recipe from Ice Cream Social by Mary Jo Thoresen and Anthony Tassinello. It’s similar to a vanilla custard base, except you whip the eggs and sugar first to incorporate more air into the base, resulting in silky, ethereal ice cream.

This is delicious on its own but also serves as a great base to sprinkle in your favorite toppings: a swirl of fudge or caramel, M&Ms, chocolate peanut butter cups, chocolate wafers, Oreo cookies. I especially like the combination of amarena cherries, cacao nibs, and bits of dark chocolate.

I’m going on record: There is nothing more satisfying than freshly spun ice cream.

Set-up your chilling station: fill a large metal bowl with ice and a little cold water. Nestle a slightly smaller metal bowl inside the bowl with ice. Then set a fine-mesh strainer inside the smaller bowl. This is where you’ll strain the cooked custard base.

Combine the eggs, egg yolk, and sugar in a mixing bowl and whip, using a stand mixer or a hand-held mixer, over medium speed until light, fluffy and light yellow in color, about 8 to 10 minutes. Turn the mixer to the lowest speed while you prepare the milk.

In a heavy-bottomed, 4-quart pot, add the milk, heavy cream, corn syrup, scraped vanilla bean flesh, and vanilla bean pod. Heat until steam rises from the surface and little bubbles start forming around the edges of the liquid. Stir intermittently to dissolve the corn syrup.

Stop the mixer. Add the whipped egg + sugar mixture to the hot milk mixture, whisking well to fully incorporate. Over medium heat, cook the custard until it coats the back of a wooden spoon (temperature should reach around 170 degrees). Stir with a spatula and be sure to get in the corners to prevent scorching and to keep the egg from overcooking.

Quickly pour the custard through the strainer into the chilled mixing bowl. Do not scrap the bottom of the pot. Lightly tap the strainer with the heel of your hand to encourage the liquid to pass through. Do not press down on the solids in the strainer.

Stir the strained custard base with a clean spatula periodically until it’s cooled completely. Transfer to a clean container and rest in the fridge at least 2 hours, preferably overnight.

Spin the base according to the ice cream maker’s instructions. I used a Cuisinart ice cream mixer, and I spin this base for about 45 minutes.

Optional: during the last 5 minutes of spinning, sprinkle in your favorite toppings. Transfer to a clean container and chill well in the freezer. 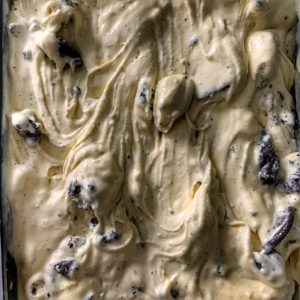 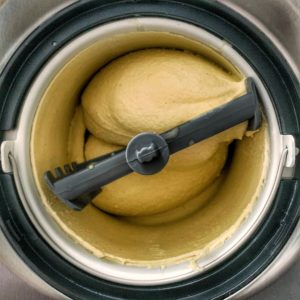